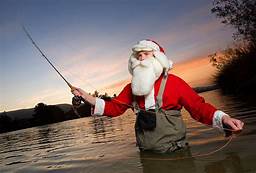 Atlantic Salmon on the Shetucket River

GOOD NEWS!  Stocking will take place soon on the Shetucket.

Here is the latest release from CTDEEP:


TROUT and Salmon Stocking Update- Fall stocking in Rivers and Streams is on hold- too much water!Look for more widespread stocking in lakes and ponds and trout parks coming next week. Also, the first round of Atlantic Salmon Stocking is coming soon to the Naugatuck and Shetucket River Broodstock Areas- but it will depend on flows moderating.

If you haven't fished the Shetucket, we have and we know the likely spots!  See our contact info at the bottom of the page.  As water levels lessen, hopefully in the next few weeks, CTDEEP will begin stocking for this popular fall fly fishing opportunity.

The Blue Quills/Mahogany Duns and Hendricksons, both duns and spinners at dusk are present on the Natchaug providing some opportunities for fishing to risers.  With the water clarity and current levels, sight fishing to trout holding down in the water column will usually bring them to the surface.

If all else fails, float an emerger, then swing and sink it under just in front of the target.  many times you will get a chase and a take when insects are hatching but not on the water in quantity. 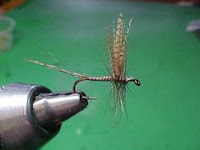 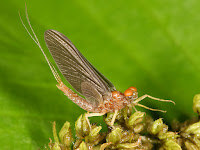 Not much caddis activity but noticed a few yellow sallies, a stonefly, around just recently. 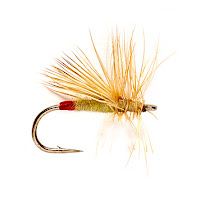 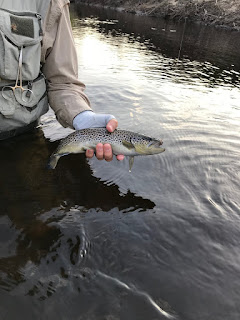 A nice brown taken on a Hendrickson pattern...


The fish are there, some very nice browns, possibly fall holdovers, be patient, fish where others don't, 5 or 6x
nothing larger and...

A sad note to begin...Bernard V. Kreh, known as  "Lefty" to the worldwide fly fishing community has passed on at age 93. A renowned author, instructor, story teller and fly fisherman, Lefty was admired by all who had an opportunity to be in his presence.  I had that opportunity a few years ago in a lesson with Lefty... 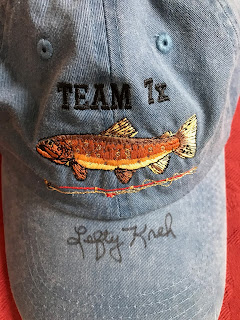 I'll treasure his perfectly scribed autograph and the memory of a man who was a giant in our sport.

A few weeks now and the CT Trout season will be in full swing.  DON'T FORGET...a trout stamp from CTDEEP is required for a $5 fee, available on-line at the CTDEEP SITE and of course, a 2018 fishing license!

Stocking has begun with reports available at the above link.  Usually by this time, we've had an opportunity to get to the Moosup and Yantic rivers for some pre-opener action.  The weather has not cooperated although the stream levels and flows are currently in good shape. The Salmon River is also open year round and has received an initial stocking as has the Willimantic River TMA. The Farmington as usual fishes well year-round.  Stop in and see Grady at Upcountry Sports in New Hartford...if he doesn't have it, you don't need it!

Early season stones should be around on warmer days and shortly thereafter we should see the quills.
Hopefully our great eastern CT freestones will hold up with the proper rain and water temps. 2017 was an unusual year for hatches...sulphurs and caddis were not in their usual abundance on the Natchaug, although we did see a decent hatch of Hendricksons in late April/May.

Soft hackles and CDC emergers fished in the film are great early season producers on the Natchaug and Shetucket rivers.  Everett has a new "killer wasp" pattern which is always a winner as the season progresses.


He's working on an ISBO pattern...(IT SHOULD BE OUTLAWED) photo coming soon!

Organize those fly boxes (for the 1000th time!), tie on a new butt section, leader and tippet and stand by; bring on Spring, warm days, cool nights, solid hatches and hungry trout.