DIDYMO present in the Farmington River

CT DEP has confirmed the presence of Didymo or more commonly "Rock Snot" in the Farmington River.  This highly invasive algae can spread to other waterways if proper precautions are not taken.  It is not uncommon to wade and fish the Farmington River one day, perhaps the Willimantic River the next and maybe the Natchaug river the day after.  In each case felt sole wading shoes, boots, and waders may not be completely dry before entering a different stream or river.  While the tailwaters seem to be more susceptible to Didymo invasion, WE CANNOT BE CARELESS in protecting our freestone Eastern CT streams from this threat.  The DEP recommends the following:

Humans are the primary vector responsible for the recent spread of didymo. Anglers, kayakers and canoeists, boaters and jet skiers can all unknowingly spread didymo.The microscopic cells can cling to fishing gear, waders (felt soles can be especially problematic), boots and boats, and remain viable for months under even slightly moist conditions. To prevent the spread of didymo to additional waters, DEP asks that anglers, especially those who also fish the Farmington River or streams outside Connecticut, and other users practice CHECK, CLEAN, DRY procedures.
· CHECK: Before leaving a river, stream or lake, remove all obvious clumps of algae and plant material from fishing gear, waders, clothing & footwear, canoes & kayaks, and anything else that has been in the water and look for hidden clumps. Leave them at the site. If you find any later, clean your gear and dispose of all material in the trash.
· CLEAN: Soak/spray & scrub boats and all other “hard” items for at least one minute in either very hot (140°F) water, a 2% bleach solution, or a 5% dishwashing detergent solution. Absorbent materials such as clothes and felt soles on waders should be soaked for at least 40 minutes in very hot water (140°F), or 30 minutes in hot water (115°F) with 5% dishwashing detergent. Freezing thoroughly will also kill didymo.
· DRY: If cleaning is not practical, after the item is completely dry to touch, wait an additional 48 hours before contact or use in any other waterway.


Team 7x, fly fishing instructors and sponsors of "Evenings on the Natchaug" (below) will make a special effort to educate Natchaug River and Eastern CT anglers about the threat of Didymo during the 2011 fishing season.
Posted by TEAM 7x at 10:43 PM No comments: 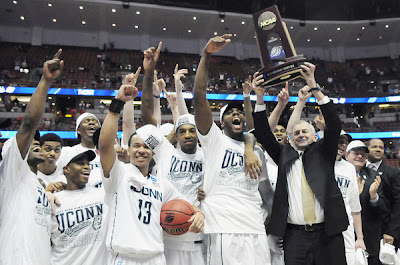 And then there were four...No one in America, likely anywhere in the world could have selected this incredible Final Four matchup!  Certainly for UCONN fans we couldn't have dreamed this up back in November.  A remarkable, stunning run of 9 wins, 8 over ranked teams in 19 days, has the Huskies in solid position for an NCAA title!

PUT YOUR FLY FISHING PLANS ON HOLD!!  The ending to this, maybe college basketball's greatest story, is yet to be written.  GODSPEED Huskies...bring home the championship! 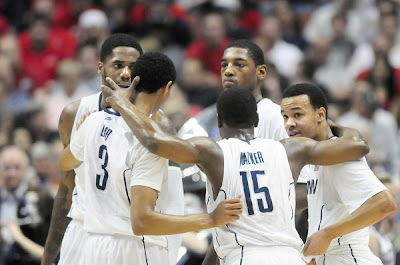 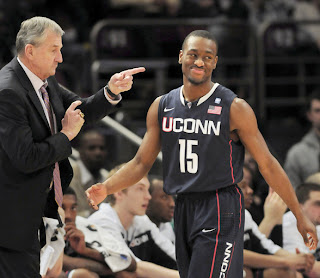 No words can describe the UCONN HUSKIES performance over the past 5 days. The nation's most outstanding college player in 2011 literally put a young team on his back and carried them to the championship of the Big East...the toughest college conference in the land. NBA players moan and whine about playing back to back games in which they walk it up, shoot it up and saunter back to what they call defense. Please...
Kemba Walker's drive down the lane in the final seconds past Louisville defenders on legs he couldn't feel, totally "gassed" as he admitted later, finding the outstanding freshman Jeremy Lamb on a dish and a slam capped off a performance for the ages. 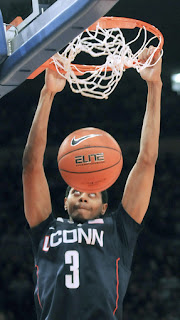 I was in the Garden, the mecca of college basketball, just off what was to be the winning end, for the Pittsburgh game. All 19,000+ knew the drill with 8 seconds on the clock. Off a brush pick Walker was isolated on McGhee; no match, no hurry. With a step back, he rose and fired, the red light surrounding the backboard glowed as the buzzer sounded...you know the rest!
So put aside the Jimmer talk, the Ben from South Bend shtick, this young man is a champion in every sense of the word, not just for his record breaking individual performance, but for his cool, confident leadership. Indeed there is no "I" in team and no "I" in Kemba Walker either. On to the NCAA's...anything's possible, we just witnessed that!
Posted by TEAM 7x at 9:57 PM No comments:

The following TMA's have no closed season and offer some early season opportunities:

Look for early season small black stoneflies. With the runoff, most are running a bit high and I hope to have a condition update soon.
Check out what looks like a great reel at flyfishing benefactors. Beautiful fit/finish, sealed drag...will have review as soon as I can get on the water!! The Snake I, large arbor, lightweight.

BACK TO THE BIG EAST...I'm still on Notre Dame's bandwagon! My choice to win the BE tourney at MSG. I'm hoping UCONN gets to Thursday's quarterfinal, with nice seats at the Garden for all 4 matchups! They'll need a big turnaround from the post players...huge disappointments down the stretch.

My case for Kemba Walker as BE player of the year:

UCONN would very probably be at 14-15 wins without his presence and tremendous individual effort. They would simply be out of the post-season picture. NO other team in the BE features a scenario where a post season berth depends so much on one player.
AND...that's what it's all about...getting to the show! Hansborough, great player, reminds me so much of McNamara at Syracuse of the past, but ND gets there regardless of his play; they're solid. Should KW not be the man, Dwight Hardy should be. His play has energized the Johnnies and they'll be in the field for the first time in a long time.
Friar's Brooks a great shooter, but the team's a mess and I can't see his selection.

March Madness...in one flyfisherman's opinion, the best sports event of the year!
More later on my Final Four picks!!
Posted by TEAM 7x at 5:09 PM 1 comment: