Black Friday on the Shetucket River

Black Friday resembled opening day of trout season with popular runs filled with fly fishers on what was a warm late fall day.  The Atlantics are there, no doubt!  Enticing them to strike a fly is another story.  Here's Jay, a Shetucket regular who told us he had 10 landed salmon to his credit this season with a spectacular fish!  All of 33" in length as he measured him out before carefully releasing.  Jay said he "never" fishes black but this beauty took what resembles a small wooly bugger, maybe 8-10 in size and all black. BLACK FRIDAY????   It certainly was for Jay!!   GREAT fish Jay, I'm pleased to have been a witness to the battle.  Kudos, since I had hard-fished the exact same run earlier in the day! 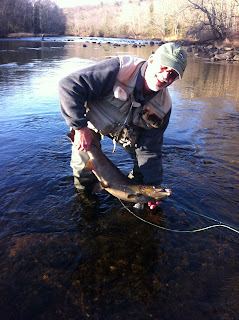 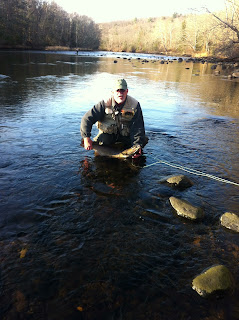 Here's hoping for a few more warm days before we move into 2013!
DRAG FREE everyone!

The CT DEP stocks excess broodstock Atlantic salmon on the Shetucket and Naugatuck Rivers in October/November.  The Shetucket receives 300-400 fish stocked below the Scotland dam.  Here are the best access points.  Team 7x spent a warm afternoon on the Shetucket, before hurricane Sandy with some success! 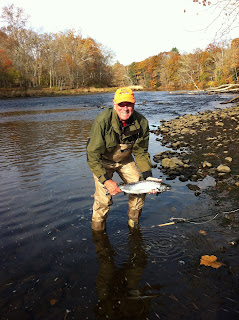 This nice Atlantic in the 4-5 pound range showed in a fast,deep riffle and hit a 2/0 deciever when swung in front of him.  What fun on a 5 weight as he took several leaps and runs before giving in.  He was promptly released since this is a catch-and-release regulated area until November 1. 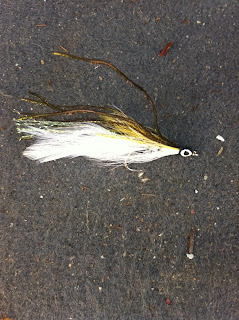 This saltwater deceiver tied on a 2/0 hook with 3x tippet on a sinking leader did the trick!  We broke several fish off on a Mickey Finn as well.  They seemed to prefer hanging in the deeper seams between fast and slow water.  Pick a nice day and get to the Shetucket for some fall salmon!  They're not easy...but they are there!

A WORD OF CAUTION:

The Scotland dam releases water unpredictably!  Within minutes on the afternoon we were there, not far below the dam, the water level rose a good 12", forcing us to hustle off the river!

Email us at team_7x@yahoo.com for specifics on access or see the stocking map link above if you are planning to go.
Posted by TEAM 7x at 5:11 PM No comments: