In 2019, CTDEEP stocked 460 adult broodstock Atlantic Salmon in eastern Connecticut's Shetucket River.  In this 2020 year of drought, water levels are off the charts...LOW!  Our favorite eastern CT freestones have been virtually unfishable since early June with no recovery in sight.  ALL EASTERN CT RIVERS ARE "PENDING" FOR FALL STOCKING as of today.  Even the Farmington flow rates are at significant lows.  In the Catskills, NYC's mayor is threatening to cut off ALL flow to the Delaware system from its upstream reservoirs due to low water, jeopardizing fall wild brown trout spawning.
What's it all mean?  Despite CTDEEP's Brian Eltz's  email to us in July indicating that the fall stocking of AS would be similar to 2019, it would seem impossible with current water levels.  The first fall stocking usually takes place in mid October.
In a year like no other, in MANY respects, the fall Atlantic Salmon fly fishing season that we look forward to is very much in doubt. 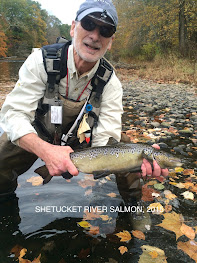 A quick recap of the early season on the Natchaug; more than 16,000 trout stocked, fall holdover rainbows provided some good dry fly action with a return of sulfurs that hadn't showed much in recent years.  Hendricksons and March Browns were very sparse.  Caddis were not out in usual numbers, especially the usually reliable Black Caddis.
The most reliable hatch was the early stones and Blue Quills/Mahogany Duns in March and April.
The Yantic had good numbers of Caddis at times and the Salmon River was very productive for a period of time before low water and rising temps.  The season on these lovely freestones gets shorter and shorter each year without steady periods of rain.
If you haven't seen this outstanding documentary...DO IT! Available on Amazon Prime. 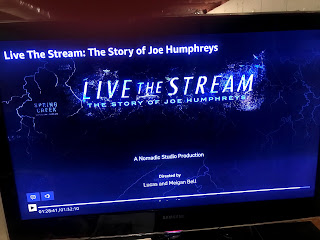 On a brighter note, long time fly fisherman and Team7x'r Steve turns to the salt water in his chase for False Albacore as fall begins.  He makes the trek from central CT  to the Rhode Island shore several times a week. Here's a beauty taken off the west wall in East Matunuck! 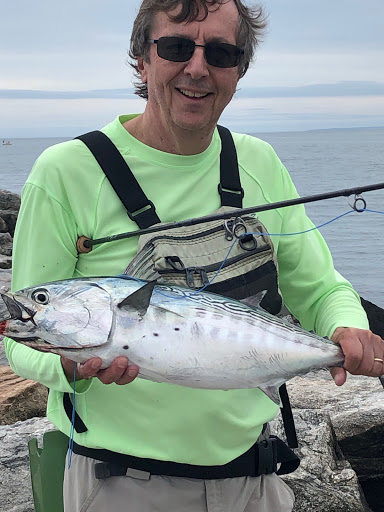 Stay safe everyone.  We will keep you advised via email (if you haven't joined our email list, please do!)  with the latest updates on Atlantic Salmon prospects.
DRAG FREE!
TEAM7x.com
Posted by TEAM 7x at 12:07 PM