Rivers blown out...cold weather...can't fish, so my next favorite pastime is college hoops, especially as we near the ultimate championship in sports, the NCAA National Men's Basketball Championship! Six games, all on neutral courts, win 'em all or go home! Six games against the best in College hoops..what a great tournament so far.  I saw in person at the 1st and 2nd rounds in Providence, the ultimate Cinderella, St. Mary's dismantle Richmond and Villanova. They will bust my bracket if they beat Baylor, but I'm rooting for 'em!  How can you not like the big guy OMARRRR!  See him here. Or the Aussie in the back court who can shoot lights out! Omar Samhan is a big time low post player with Kevin McHale moves...enjoy him!

Tennessee is as big,deep, and talented as any team remaining and could get to Indy. Love Turner and O. State and this is a permier matchup.

K-State's road looks easier if they can recover from a punishing win against Xavier...the worst called game I've seen, despite the number of fouls and DQ's. Curtis Kelly is a player!  Ask UCONN's Jim Calhoun about him...he let him walk after one year of no-playing time; that program's a mess, but that's another story. I can't see Butler advancing.

Kentucky?  30 points in 2nd half?  Deep, big and all of that, but experience?? We'll see. The Mountaineers manage to get by in games they seem out of it and they just might knock off Calipari and his guys here.

I have Baylor in my FF but will be rooting big time for the guys from Moraga, CA. How can you not for a College with 2500 undergrads? A COLLEGE...the only one still standing!

Finally...shook hands with College basketball's best color guy, Bill Raftery between Tennessee and Ohio game in Providence 2nd round.  Small talk about Tenn's chances etc.  What a guy, stops to chat with everyone, a smile for everyone. He and Verne Lundquist (one of sports greatest calls "YES SIRRRR", remember the event?) who I chatted with after Texas/Uconn game at Gampel are paired for the Midwest.  IMO, they're the best in the college hoops and listen for the usual Raftery classics..expect MAJOR ONIONS at some point!!  or the standard:  "Verne Lundquist, Ohio State goes............"you know the rest!   Best to all in your brackets! 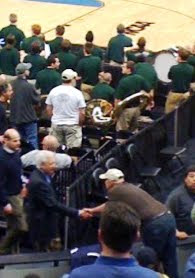 Searching for the Holy Grail...again!

Decided to try some new fly boxes in an effort to consolidate and reorganize.  Somehow that never works and like most all of us, I end up with a gazillion boxes of all shapes, sizes and material bouncing around my kit bag!  The Flambeau "Blue Ribbon" twin boxes are the choice of the moment! 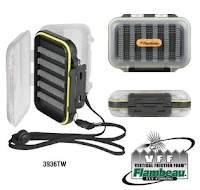 The vertical friction foam technology is unique and the boxes are waterproof, a welcome feature after having dunked most every other fly box I've owned!  It specs at 160 flies...we'll see! I'm impressed with the construction, see thru lids and a nice tight latch.
For smaller stuff the Crystal Creek series sports a magnetic side and the same friction foam as above with a watertight gasket. 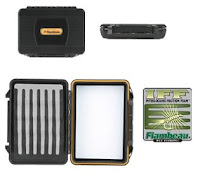 So far....so good. Maybe this IS the year for finally making sense of what patterns to carry... in what... and when! Two twins and a mag box do fit nicely in one compartment of the FP Guidepack below.