The Natchaug River in eastern CT is a "home" river of sorts in that I fish it more often than any other during the spring and fall months. Lower and warmer water in the July/August timeframe pretty much restricts fishing during those months. Plenty of access, Trout Management Area, and the 2nd most heavily stocked river in CT makes this gem a fly fishing standout in Eastern CT. April 23rd saw quills, small spinners, likely BWO or mahogany, and large spinners falling at dark after a brief late afternoon shower. Fish were taking the spinner at dusk, and earlier in the afternoon, the dark quill body imitations. A few caddis showed but not in the proliferation that is common a bit later in the month. Lots of midge present as well. The Natchaug holds some very nice fish. some holdovers from the autumn stocking and some from previous seasons that manage to survive the low warm water summers.

Fish were sporadically rising to the above imitations; not as active as this river will become once the caddis and then sulphurs begin their appearance. One brown who took a spinner came to hand with a snell and swivel hanging out of its mouth...which may have accounted for its unusual rise form prior to taking the spinner. I cut the snell as close as possible; trying to remove the deeply imbedded hook would have killed the fish no doubt. Shame! Even though this fish was compromised by this situation it nonetheless took the spinner; we all need food when we need it! Took several more very nice rainbows BUT this is not about reciting war stories, or personal brags, or numbers...plenty of that on any number of forums devoted to fly fishing. That subject's for another time!

I won't be too specific here on locations as the entire stretch along CT 198 in Eastford/Chaplin CT provides ample access. Email me at flifishri@yahoo.com for more specifics or any questions. The Natchaug remains one of my very favorite trout streams for reasons beyond the ample fly fishing opportunites; beautiful water, scenery, wildlife and away from the crowd in the state park/picnic area, SOLITUDE!
Posted by TEAM 7x at 12:22 PM 1 comment: 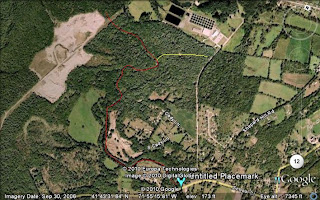 Moosup River in Central Village (Plainfield) CT is a TMA, catch and release and thus open year round. The past few days, post flood waters, has shown lots of early stoneflies and hungry newly stocked fish. Not many looking up as yet, but did manage to take a brown on top with a stimulator. This is a lovely stretch of river, directly behind the Quinebaug Trout hatchery, with easy parking and access via the yellow trail. The Moosup empties into the Quinebaug, downstream of the hatchery. Deep runs, pools and riffles amidst wooded forest area provides good cover and cool water. Stocking reports show that some 2200 trout are stocked in the TMA, with 7000 throughout the Moosup system. There are holdovers; I had a solid 18 incher on hook for several minutes in fast current and couldn't get him to hand to see if he was a holdover or not...oh well!
This river originates in RI, and receives little fishing pressure with stocking by RIDEM not seemingly spread out although there are some very nice stretches of river on the RI side.
For now, stonefly nymphs fished deep will produce all the fun you would want! Terrific looking dry fly water and in a few weeks with the emergence of early-season mayflies, the on-top action will materialize! Hopefully by then the pale,dreary looking browns and rainbows will have colored up a bit! There are some BIG fish in this TMA; Fished the Mooosup, or any other Eastern CT rivers? Let me know your thoughts! I will not be overly specific with locations in these public posts, but hope to provide some level of interest for those who haven't fished some of the less well-known streams and rivers of Eastern Ct and RI. Drag free!
Posted by TEAM 7x at 12:43 PM 2 comments:

The Blackstone River is a put and take trout fishery between May and late June, and again in the autumn. It is generously stocked with large (12+") browns and rainbows and is easily waded during normal conditions in the Ashton section of Cumberland and Lincoln, RI. The river features a solid black caddis hatch, occassional BWO and sulphurs and provides some relief for fly fisherman from the heavily pressured Wood River in southern RI. The following video was taken during the recent flood conditions in RI. Normally this section of the river is easily waded to thigh high depth! It will take a week or more for the Blackstone to return to normal depth. The deck of Ashton Mill shown in the video is usually 8-10 feet above the water level.