OPENING DAY 2013 found a small but enthusiastic class of fly casting students taking part in our introductory session following the mornings usual frenzy! All participants had spin fishing experience but virtually no experience with a fly rod. ( In fact one young man had recently bought a fly fishing outfit and placed it on his wall at home! ) The youngest student, a 12 year old girl, enjoyed using one of Team 7x's youth outfits and made good progress in the brief time we had. Blustery conditions presented some problems but also an opportunity to practice the useful sidearm cast. Thanks to Team 7x's Jeff Rainville for assisting and sharing his fishing knowledge. And, a special thanks to Steve, Pam and Chris at Charlie Brown for hosting Team7x.

Wednesday, April 24 update: Matching up to the quills, small black caddis and a few hendricksons did the trick on the sporadic risers. Lots of insects present and the fish should become more active in the days ahead. The water is LOW, not a great sign for this early in the season, but plenty of fish are present. The "Natchaug Top Twelve" black cdc emerger fished on top and in the film produced several nice browns. 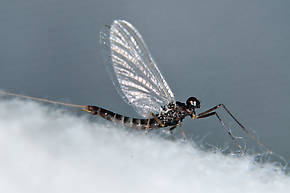 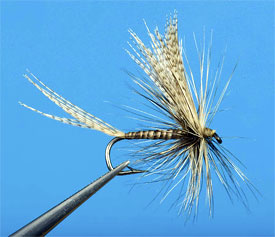 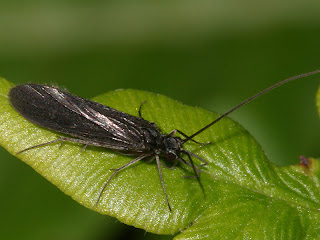 "The title of this should be " I need a bigger net " :) On Sunday, I ended up at the Natchaug as planned, second pool to the left of the road going in to the Forest area and surprisingly, there were not to many people fishing.. The flows were fast ( for me anyway ) and the water was a very cold 42 degrees. Nothing was happening on top, so I put on a # 14 Red Head nymph... Simple fly... Copper bead head, red thread, Pheasnt tail tail and a single wrap of fine copper wire on the body finished off with a two turn white hackle behind the bead.

Any way after about 5 or 6 casts I thought I had hooked into the bottom, but then felt the pure power of what turned out to be a 17" VERY healthy Brown at just over 3 pounds.. Took almost 15 minutes to coax him into what I thought was a good size C & R net, but he just barely fit.... It was an absoulte blast !!

There were a few notable events here for me... First,there were 3 more Browns, all over 15" in the next hour or so, before I got to cold and left. Second, I caught them on fly's that I tied..... Thanks Everett !!! Finally.... I do need a bigger net :) There were two other guys fishing near me, one up and one down stream, and they were getting the Browns as well.. Kind of miss the jumps of the Rainbows, but these fish were amaizingly strong and just as fun.

For those who appreciate fly fishing history, two storied locales in the UK, birthplace of dry fly fishing, are the River Test and the River Itchen.  The River Itchen is located in and around Winchester, southwest of London about an hour and a lovely English country town.  Izaak Walton's tomb lies in the cathedral in Winchester and his "The Compleat Angler" remains a classic in which much is written about the gin-clear English chalk streams.

I spent a day on the beautiful River Itchen recently as part of a trip to London.  My guide Mick Siggery and I had a "beat" all to ourselves on what was the worst weather day of a week long trip.  Wind at 30-40 MPH, periods of rain and overcast conditions not worth venturing into.  Since all beats on the chalk streams are private, requiring advance payment and arrangements, I had little choice but to take the train ride from London to Winchester and hope for the best.


"Those of us who will not in any circumstances cast except over rising fish are sometimes called ultra purists and those who occasionally will try to tempt a fish in position but not actually rising are termed purists... and I would urge every dry fly fisher to follow the example of these purists and ultra purists."  Frederic M. Halford

In the brief minutes that the wind subsided, we had a few rising fish to olives...larger than the olives we are used to here in the colonies! Not inclined to nymph, I managed to raise a few fish, with no success in hooking.  Large Grayling were also present hugging the bottom.  Hooked a couple small ones, but all in all the catching was not good...the experience and the setting was great!  The day is what God gives us, so "no worries" as the English say...I thoroughly enjoyed the once-in-a-lifetime experience on a famed English chalk stream, and can check off one of my "Bucket List" items!

We don't realize how great we have it as fly fishers in the US.  There is simply no open rivers and streams to speak of in the UK; every outing requires a reservation and a fee to fish a certain "beat."

For those who have fished the Montana spring creeks, the English chalks are similar; gin-clear, lots of vegetation and the fish are visible and spooky. Here's a look:

All systems go for OPENING DAY!

The rivers and streams look to be in great shape for the CT opener on April 20.  RI opens the week before on April 13.  Levels, clarity and water temps are improving daily.

We'll be at Charlie Brown Campground on the Natchaug on the 20th in the afternoon, following the usual frenzy in the AM.  If you're in the area stop by; we'll be doing some casting lessons and general fly fishing gear tune ups for campers and visitors near the soccer field.  If you do stop by, please park to the left of the rest room area below the first gate but outside the 2nd gate/fence.  This is the area to park at anytime you wish to fish the campground area.  It's always nice to check in with Pam, Steve, or Chris.  They always welcome visitors!

We will have the Ross Journey youth outfit available for casting, along with our "Natchaug Top Twelve" flies and boxes.  We have all the popular Fly Fishing Benefactor reels for demo as well.

Two patterns we like early on are the CDC emergers in black and brown, size 16.

They do a great job of imitating the early season quills that we see on the Natchaug, and the CDC allows them to be drifted or fished just in the surface film as an emerger.

Need leaders?  FFB has a great selection at the lowest prices around.  We just picked up a dozen 9' 6x for our clients and classes.  We continue in 2013 as Pro Staff for Fly Fishing Benefactors; top products, prices, and profiting some great causes. Take a look at their site.

We're now booking "Evenings on the Natchaug" for early May, a great time for early season hatches and rising fish.  Don't forget licenses!   Available on line from CTDEP.

And...if you haven't joined out "team" mail list, be sure we have your email address.  We will be updating more specific info, not posted here, to our subscribers throughout the season.
We welcome you input, reports and comments.
DRAG FREE!
Posted by TEAM 7x at 10:55 AM No comments: